„I was kept in a barrack, very close to the airport, which I had to go through on my way to the factory. The barracks were divided into rooms, with eight people living in each room. We all received a wooden bed with a straw mattress, a pillow and a gray blanket. All of the beds and the bedding were infested with bugs.“, – Stanislawa Michalowska from Poland recollects her experience in the barracks at Tempelhof Field.a 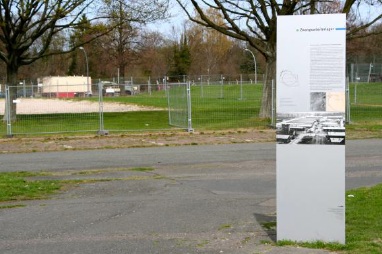 From 1940 until 1945, the miserable living quarters of the men and women who were forced to work for Weser Aircraft Manufacturers on the airport grounds were located here.

From 1940 until 1945, the miserable living quarters of the men and women who were forced to work on the airport grounds were located here. Starting in 1939, the Weser Aircraft Manufacturers (Weser-Flugzeug-Bau GmbH) produced the Junker Ju 87 dive-bombers in the hangars of Tempelhof Airport. The first foreigners were brought to the forced labor camp in November of 1940. Most of the laborers came from German-occupied Poland, but, beginning in January of 1941, prisoners of war from France were also brought to the camp. People from Italy, Belgium, the Netherlands and from German-annexed land in Czechoslovakia were also exploited for labor. However, it was the so-called Eastern workers (Ostarbeiter) from the Soviet Union who were especially discriminated against. On February 20th, 1942, a “Special Decree for Eastern Workers” (Ostarbeiter-Erlass) was issued.  Among other regulations, it required the “workers from the East” to wear a patch making them distinguishable from the rest of the forced laborers. In a statistic from April 1944, 4,151 people were known to be working for Weserflug at Tempelhof Airport. Over half were foreign workers, most of whom were forced laborers. 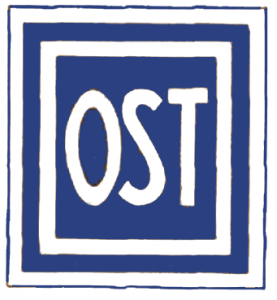 Forced laborers from Eastern European regions were forced to wear this patch on their clothing.
(c) CC BY-SA, http://commons.wikimedia.org/wiki/File:Ostarbeiter-Abzeichen.png

In addition to their work for Weserflug, the forced laborers also worked on the production line for Lufthansa’s munitions plant. In 1940 Lufthansa began using the grounds at Tempelhof Airport to manufacture their radar transmitters, which were used for defense against air raids. Between 1940 and 1942, Jewish workers were exploited for the production of the transmitters, in addition to their work repairing war planes.

At least two encampments existed at Tempelhof Field. The biggest camp was made up of more than twenty barracks and stretched south of Columbiadamm. The second complex was located on Tempelhofer Damm, and forced laborers from Eastern Europe were detained there beginning in 1943. A military hospital and canteen were also added to the complex. Barbed wire fencing surrounded the barracks, while armed guards patrolled the area. As in all Nazi work and death camps, the laborers were sorted in the barracks according to their nationality.

Stanislawa Michalowska’s memory of her internment at Tempelhof Field gives us an idea of the conditions under which many laborers were forced to live. Not only does she remember the inadequately equipped barracks, but also the lack of nourishment and food the laborers received: “Early [in the morning] and in the evening there was a small piece of bread that had to be shared between all eight people in the room, a few boiled potatoes with a bit of sauce and every once in a while about twenty grams of meat.”b

After the war the barracks were demolished, and forced labor came to be regarded as an uninteresting consequence of war. The engineers of the forced labor system were only minimally held responsible for their actions, and the crime itself was only publicly addressed and dealt with to a marginal degree. “Nevertheless,” says Berlin historian Thomas Irmer, “the existing evidence provided by recent research on the history of the region indicates that during the [Second World War] Berlin evolved into a metropolis for Nazi forced labor.”c

You will find traces of that time on the way to the next stop.