From the first runway, walk further along the flight line to the second runway. The airport runways, 1.8 and 2.1 kilometers long, respectively, might appear to get lost in the horizon, were it not for the passing trains and industrial buildings in view to the south.

This is where the notorious Stuka, or Junkers Ju 87, dive-bombers took off. They were known for their infamous Jericho sirens, which made a repeated sound while in flight and during attacks. The piercing sirens were intended to psychologically weaken the enemy. The noise of the Jericho siren is often mistakenly used in film and on television to accompany images of a plane diving and/or crashing.

The most famous airplane to take off and land at Tempelhof Field was the U.S. Air Force Douglas-Series plane known as the Raisin Bomber (Rosinenbomber). Flown during the Berlin Airlift (Luftbrücke) efforts, the Raisin Bombers carried a record 2.1 million tons of air freight between June 26th, 1948 and May 12th, 1949, of which 1.7 million tons were unloaded at Tempelhof Field.a 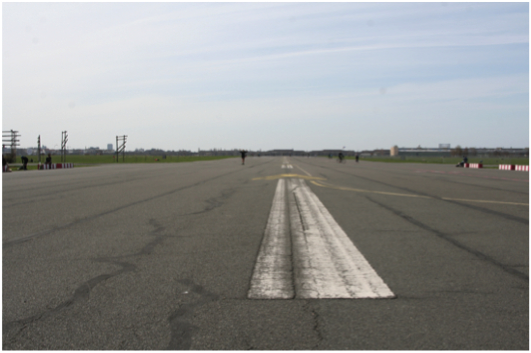 Contemporary contradictions: Today kites can be seen in the skies at Tempelhof Field, but less than a century ago the Raisin Bombers delivered food for the hungry in Berlin and the Stuka planes brought death and destruction to Europe.

When you arrive at the second runway, you will be near the exit at Oderstrasse. Before you leave the airport grounds, take a minute to turn and look at the size of the airport building. Before the construction of the Pentagon in Washington D.C. in 1943, Tempelhof Airport was the biggest building in the world. Because of the style and monumental architecture of the airport, people often associate the design with the Nazi’s chief architect, Albert Speer. However, the sketches and plans of the building were actually drawn up by architect Ernst Sagebiel.

As part of the Nazi goal to turn Berlin into the World Capital of Germania (Welthauptstadt Germania), the Ministry of Aviation contracted Sagebiel to draw up plans for an airport in 1935. Due to the outbreak of World War II, construction of the airport building came to a halt in 1942, and it was re-purposed for manufacturing war materials in 1943. Among engineers, the construction of the airport is still considered to be “incomplete.”b Nevertheless, on June 1st, 2011, the Board of German Engineers and the Board of Berlin Engineers registered Tempelhof Airport as a historical and engineering landmark.

As you leave Tempelhof Field, you will cross Oderstrasse and continue along a cemetery. The right side of the cemetery belongs to the Jerusalem-and-New-Church congregation (Kirchengemeinde), while the left side of the cemetery is that of the St. Thomas congregation. After a few meters, you will see to your right a commemorative plaque for those who were forced to work in the cemeteries for the church during the war. This is the fourth and final station of the tour.